21st Conference on
Inquiry-Based Learning and Teaching in Mathematics

Conference on Inquiry-Based Learning in Mathematics
Constructing the Future of IBL:
The Past 20 Years and the Next 20 Years
28 July 2017, Chicago, Illinois

Held during the Mathematical Association of America's MathFest, the meeting attracted over 200 attendees, at least half of whom had not attended an IBL -- Legacy meeting before.

MAA President, Francis Su, opened the gathering with a twenty-minute talk that proved to be a high-point of the entire MathFest for many people. His presentation, "Freedom through Inquiry," is available at his blog.

During the transition to the poster-session, food was brought in. (A cash bar was open throughout the three-hour meeting.) Abstracts of the posters can be viewed or downloaded here as a PDF file.

Roundtable discussions produced a rich sharing of ideas out of proportion to the mere twenty-five minutes allotted. Though only some four or five people signed up beforehand for the following five-minute talks, the flexible time slot of thirty minutes became pressed to the limit as more came to the floor microphones or to the podium to share accounts of what they have been doing or of how their interests in IBL had been piqued.

All in all, in spite of the curtailed length relative to previous annual IBL conferences, it continued the trend of reaching out and inspiring more new people.

The usual large and lively annual meetings were only partly dampened by the cold and rainy weather, unusual for San Antonio.

Our list of inquiry-based learning presentations at the conference, though probably not complete, reflects the growing interest in researching and discussing "best practices" in teaching methods.

As in the past, the Legacy project and the Mathematical Association of America sponsored a reception for Project NExT members. The socializing was interrupted for a few minutes by words of welcome and some announcements by Francis Su, Michael Pearson, Chris Stevens, Stan Yoshinobu, Angie Hodge, Dana Ernst, and Victor Piercey.

Recommended viewing: The popular Who Wants to Be a Mathematician? competition had finalists answer mathematics questions plus an historical question relating to Texas. The answer to the latter was "Moore." The video recording can be seen through the "all the action" link at their national announcement page --- the historical question is the fourth one about 11 minutes in.

Co-Sponsored by the Mathematical Association of America

From the program committee:

The Legacy project was one of the meeting sponsors this year and, as usual, had an exhibit booth where volunteer attendants, such as Project NExT fellows and IBL practitioners, distributed free literature and videos relating to inquiry-based learning.

Our registration packet flyer is available here in PDF form.

We also provided a sample listing of IBL related presentations at the meeting. 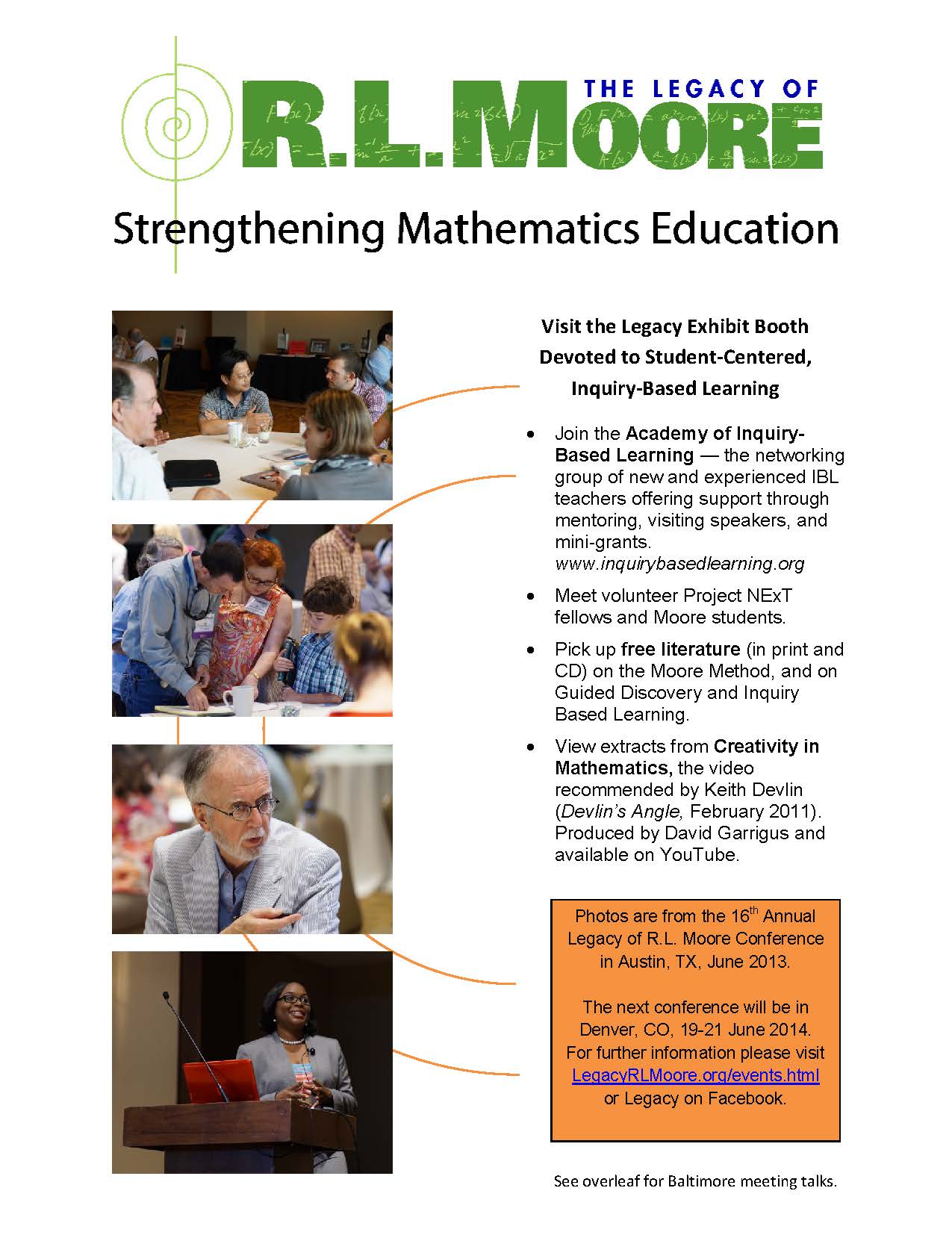 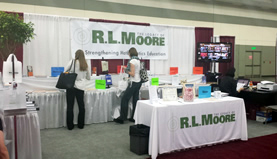 Co-sponsored by the Mathematical Association of America:

The general conference theme, reflected in its title, emphasized the inclusiveness and self-organization of the Inquiry-Based Learning community at large.

Please see the program page. for details and links to videos and other related material.

The Legacy project sponsored an exhibit booth where volunteer attendants, such as Project NExT fellows and IBL practitioners distributed free literature and videos relating to inquiry-based learning.

The Educational Advancement Foundation and the Mathematical Association of America were co-sponsors of the conference held in Austin, Texas, at the Omni Southpark Hotel.

Links to: the full program and videos of presentations

“So, Adriana, if it’s called the Moore Method, why do you keep calling it Inquiry Based Learning?”, you may ask. Well, I answer, ...

Author of Student Writing in the Quantitative Disciplines, and blogger at Change of Basis, Professor Bahls is director of the NSF Research Experiences for Undergraduates program in his department and will discuss undergraduate research and Inquiry-Based Learning (IBL).

Professor Bressoud has headed a large-scale NSF-funded project, Characteristics of Successful Programs in College Calculus. His presentation will focus on some results of this recently-completed project. He has been chair of the College Board Advanced Placement Calculus Development Committee, 2002–05, and member, 1999–2005, and was President of the Mathematical Association of America, 2011–12. He will be speaking on "Characteristics of Successful Programs in College Calculus: Preliminary Findings."

James A. Mendoza Epperson, University of Texas at Arlington

Professor Epperson oversees the mission and design of the Master of Arts in Mathematics for secondary teachers program at UT-Arlington. He also leads training and orientation of instructors working in the Emerging Scholars Program (ESP) and its prototypes across the nation. ESP is an adaptation of the Mathematics Workshop Program at the University of California, Berkeley, which was developed based on the research of Dr. Uri Treisman,. now at the University of Texas at Austin. Dr. Epperson has served on the Advanced Placement Calculus Test Development Committee (2007–2010).

Professors Guerra and Benetau are among the Principal Investigators of an NSF-funded collaborative project applying the approach of Process Oriented Guided Inquiry Learning (POGIL), which has been successful in chemistry, to undergraduate pre-calculus and first semester calculus courses.

Professor Hodge is the author, with R.E. Klima, of The Mathematics of Voting and Elections: A Hands-On Approach (AMS, 2005). He received the George Pólya Award for expository excellence from the Mathematical Association of America in 2011. The title of his talk is "Inquiry, Authority, and Democracy"

Abstract: Traditional pedagogies often emphasize the authority of the instructor rather than empowering students to become independent and autonomous learners.  In this talk, we will explore ways in which inquiry-based learning can be used to establish more democratic and less authoritarian learning environments.  Drawing on research from social psychology, we will consider the potential of inquiry-based learning to promote the habits of mind that are essential to both civil discourse and constructive engagement in society

Lee Mahavier is an English for Speakers of Other Languages (ESOL) mathematics teacher and a teacher mentor in Georgia State University’s “teacher residency” program where master's students work full-time under the supervision of an experienced mentor for an entire academic year. Her talk: "Moore Method for the Masses:  Illustrations of Success with Public School 9th Graders."

Abstract: It has been well documented that Moore Method is highly effective in university settings and with hard-working students.  We will demonstrate that it is also a successful way to teach high school students, including under-prepared and unmotivated ones.  What does Moore Method really look like in a ninth grade public school math class?  What does the teacher actually do in the classroom?   How do you know this works?  Here we will explore these questions while illustrating key elements of Moore Method with real-life examples from the 2011-2012 school year.

Dr. Rhea has been director of the Introductory Program, which serves about 4500 students annually in pre-calculus and the first year of calculus and is widely viewed as one of the most successful programs of its scope in the country. She received the Deborah and Franklin Tepper Haimo Award for Distinguished College or University Teaching of Mathematics in 2011.

IBL and the teaching of calculus will be the topic of her presentation.

Dr. White is a mathematician focusing on teacher training and teacher professional development.  She is among the Principal Investigators of a 3-year National Science Foundation grant through the American Institute of Mathematics to study the national Math Teachers’ Circle program.

She will be speaking on "Math Teachers’ Circles: Inquiry Based Learning for Practicing Teachers." See the abstract in the program.

Members of the Committee on the Undergraduate Program in Mathematics (CUPM) attended the meeting. CUPM is one the most important committees of the Mathematical Association of America, being charged with making recommendations to guide mathematics departments in designing curricula for their undergraduate students. There was a panel session to discuss the current guideline revisions being undertaken.

The Legacy project sponsored an exhibit booth where volunteer attendants, such as Project NExT fellows and IBL practitioners, answer questions and distributed free literature and videos relating to inquiry-based learning.

Click on the image below to view our flyer for the meeting: 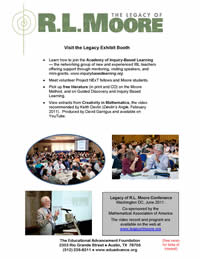 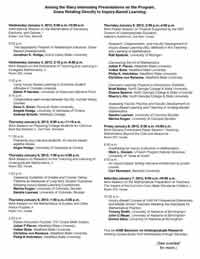 Among the many interesting Presentations on the Joint Meetings Program, some relating directly to Inquiry-Based Learning were those listed here.

For previous conferences and links to their videos see reports of past events.

The purpose of IBLMath is to increase awareness of inquiry-based learning in mathematics. (Tweets by mathematics professor @danaernst.)

The R.L. Moore Legacy Project
Comments to the Legacy Webmaster